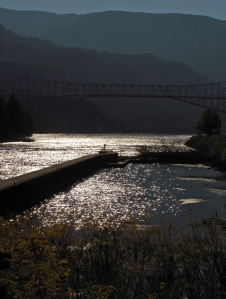 The dogs and I hiked to the river tonight.   In truth, I wouldn’t have gone if the dogs weren’t promised a daily run down the trail – it was a long day and my head was tired, my body was junk, and all I wanted truly was to curl up in a warm bed and sleep.  But as soon as we started the hike down, I was glad I was there walking in the cold in the dark in a circle of light .

And then, two miles later, we walked out of the forest onto the beach by the river, and it was one of those moments when delight and peace are real things that you can feel in every cell of body and heart.  The mists of the morning had left tiny sparkling jewels all over the sand and the rocks and the bare branches and the brown leaves, the crescent moon was low over the river and dancing the water in light, and the stars were brilliant in a sky that endlessly black velvet blue that only a crystal night sky can be.

We sat by the river for a long time, and, once,  I wished for a camera and the skills to show you.  And then was glad of not having them.  Sometimes it’s enough for something to exist just for one person.

We stayed for a long time,
and then walked back up a hill through a winter forest with star-laden branches,
and went to sleep.

Image: Bridge Of The Gods from the Cascade Locks Port;  Loree Harrell, 2013
Image related to the words only by virtue of a sparkle on the water, but it seemed the Snapshot series should have a snapshot. 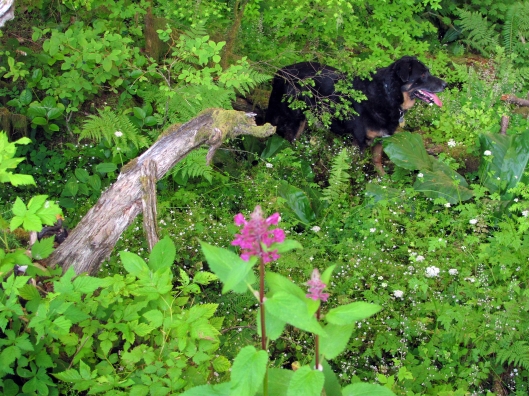 The end of July always feels like it came too soon.  There is such a brief moment of summer, and where has it gone.  Beauty day after beauty day slips away in the thousand things, defined by the small pieces of each, and the next time you look around, the greens have faded under the sun, and the river runs low and green, and the dark comes earlier every day.

It is the time to slow down and notice the tiny gifts, to make the most of the strong days and soft evenings.

And to go out in the yard and sleep with an old dog under a starred night sky. 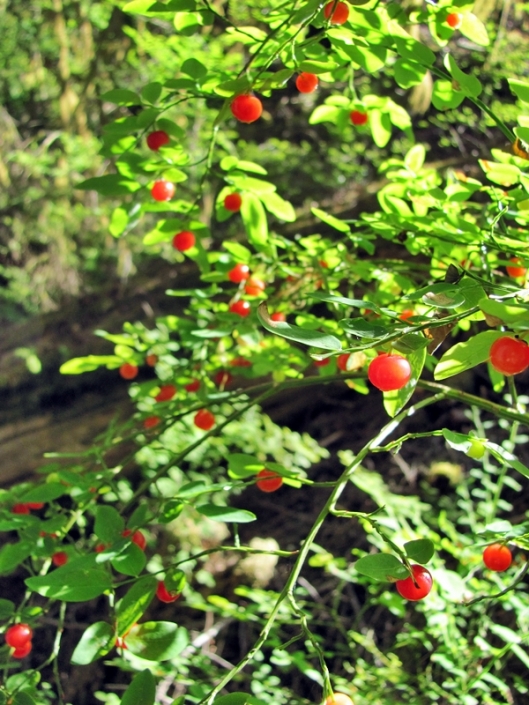 I have to tell you a funny story about red huckleberries.

You didn’t even know there was a funny story about red huckleberries, did you?

Back in the days when I was married, my husband and I went on a trip.  We must have been somewhere out in The Woods, because we were on a dirt road in a much-loved F150, and I spotted red berries on a bush and said Stop! I Want Some Of Those Berries!

My husband, being a good and sensible man, said, Are You Sure Those Berries Are Edible?

I said, Yes, of course they are.  I remember those berries from my childhood.  Dad said they were edible and we ate them and we didn’t die and so, Yes.  Of Course They Are.

My husband, being a both good and reasonable man, stopped the much-loved F150, and I debarked and ate several handfuls of the berries.

A mile or so down the dirt road, my logic superceded my enthusiasm, and I wasn’t Quite as sure those were the berries of my childhood, and I said, I Think those were the same berries we ate and didn’t die.

I could see him, being a good man, and also an ex- Eagle Scout, making a Plan for how to get me to a hospital without breaking the much-loved F150, and, really, I was being silly (probably) so I said, I’m sure those were the berries of my childhood, and we both pretended to relax while waiting for me not to die. 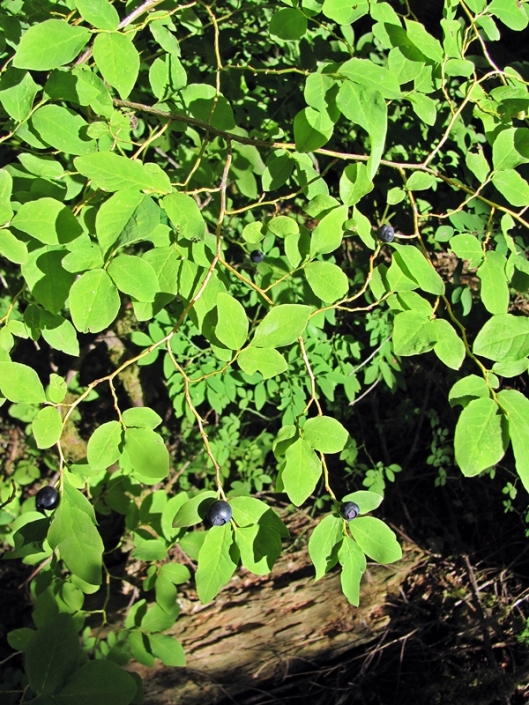 Larch Mountain is as much information as you get because, really, there ain’t enough for both of us. 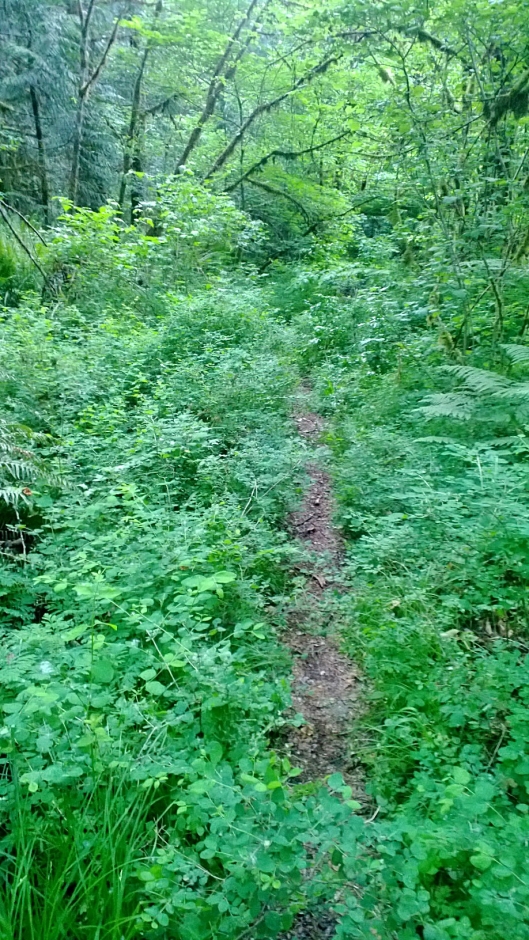 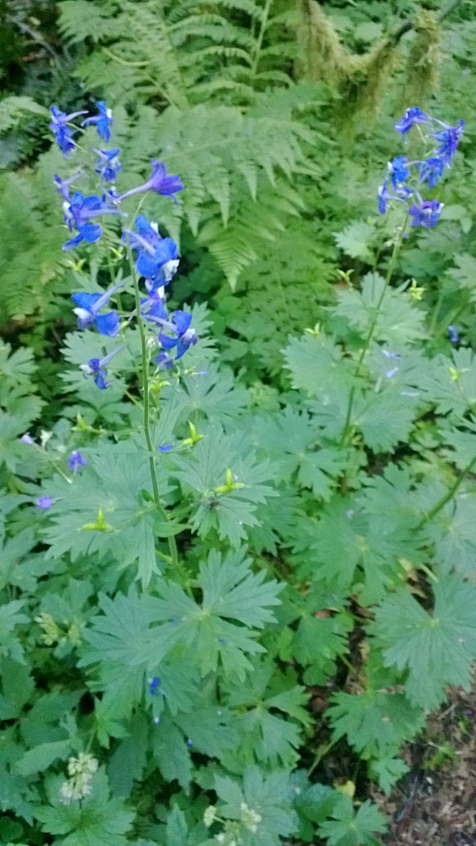 I love the living smell of spring –  the pungencies of cottonwood and warming damp earth, of scotch broom and wet dog.

Almost a match for the abundance of green. 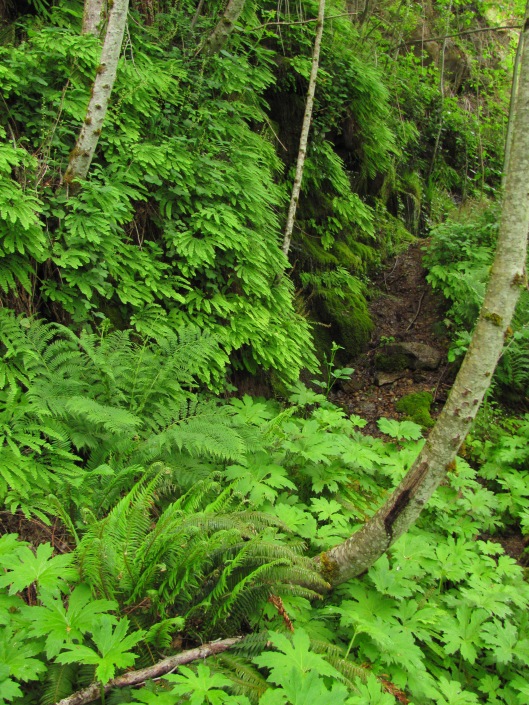 It was raining lightly when I got to the woods last night after an overcast day.  That was good after days of beautiful blue sky, as it meant we had the trail to ourselves.

In the rain, under gray skies, the forest was glowing with a light all of its own.

I never remember how it is.
Or maybe I choose not to remember.

So that each shift is fresh wonder. 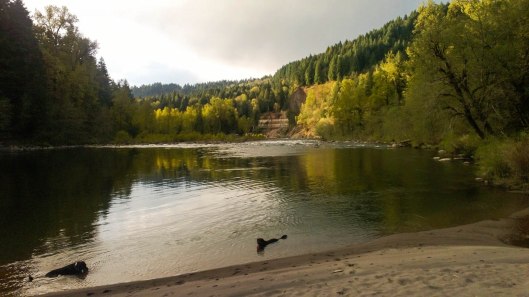 There was a moment just before, when leaves fell to ground and dust, when breath was mist in the air, when all was bared in shades of gray and brown and silver.

Now the river sang through to green and home and long sweet days.

The dogs stopped and turned into the last sun through the trees towards the long low growl across the river, and listened.
It faded, and they stood another minute and returned to the trail.

The growl came again, in the distance on the other side of the gorge, and, once again, they turned to the edge of the bluff and waited to know, then continued up the trail.

The third time the growl echoed through the trees, both turned to listen, then one turned to the woman, a clear question in his eyes. 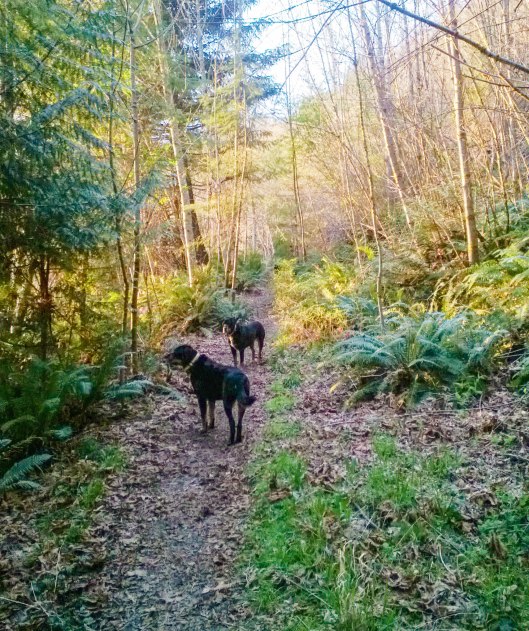 She laughed and said, “Crotch rocket”.

Both dogs turned and continued uphill towards home and dinner, the next growl unheeded.

Trail in the Sandy River Gorge.  Max and Ebb listening, King ahead on the trail, being old enough to know better.
Cell phone pics at dusk. 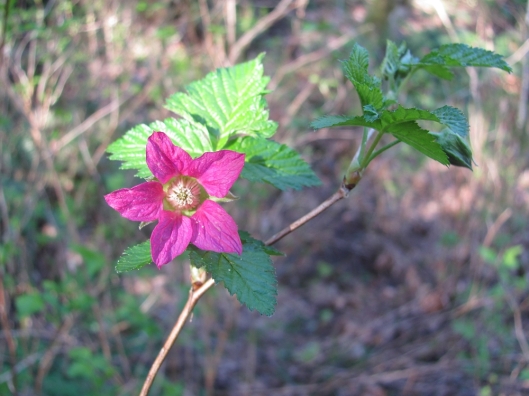 When that moment comes of spring, all the waiting things fling themselves towards change and growth and new, with the abandon of a child.  A new box of all of the one hundred and thirty three colors.

A new box.  All of the one hundred and thirty three colors.