The smelt are running in the Sandy!!!  If your response is yeah, yeah, there are fish in, of all places, the river and so…?, then it’s likely that you didn’t grow up around here forever ago like I did.  When I was a kid [not quite forever ago, but slightly back in the mists] the freezer was always full of smelt.

I hated them.  Tiny fish so you just eat the bones and I just can’t quite eat fish bones, BUT, boy was it a good day at the river to go dip them.  And Dad and Mom liked them.  I think.  Although they also claimed to like the asparagus pie debacle, so…

And then they quit running.  The last big run was in 1980 (I’m taking that from the City Of Troutdale site as in 1980 I wasn’t thinking about much beyond who was playing at The Last Hurrah that night, so I didn’t actually notice).  There were small runs in 2001 and 2003, but it’s been ten years since they were back in the river, and words like massive and enormous are being used to describe this run.

There won’t be any dipping this year as they were placed on the endangered list in 2010, so, while there’s some discussion about whether their absence was just part of an existing cycle we don’t have enough perspective to see, it’s illegal to possess them at this time (fishermen, that includes picking up a dead one on the shore for bait). 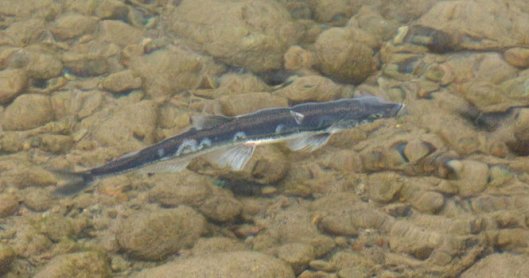 Therefore, I would suggest you get to the Troutdale Bridge, or the beach by Lewis & Clark or Glenn Otto, and witness a bit of this massive!, enormous! run of millions of fish for yourself.  That’d be where I’m heading today.